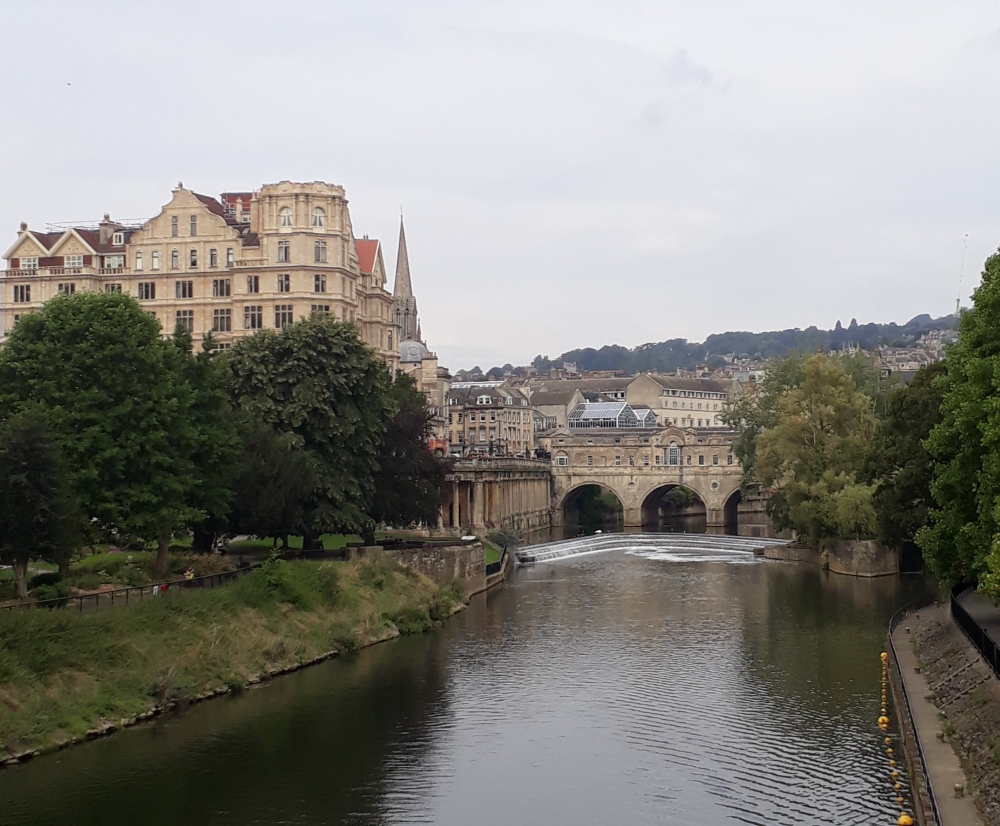 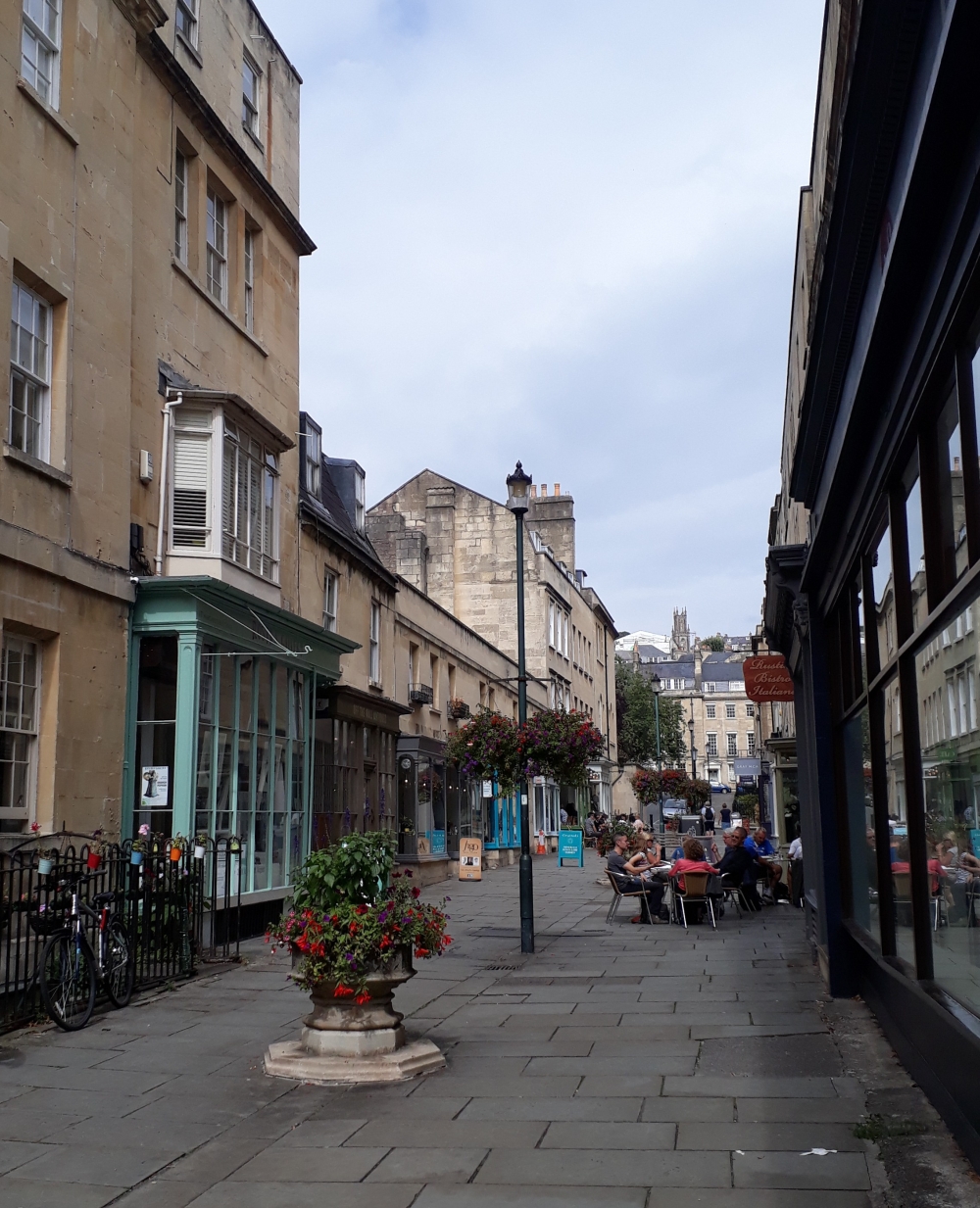 Last weekend I was lucky enough to visit Bath with my family. It’s somewhere I’ve always wanted to visit, but it’s not an easy (or short) trip from where we live in North Yorkshire, so not knowing when I’d be able to return, I made sure to appreciate the city fully.

Bath is a beautiful city with a fascinating history; built over a natural spring which produces 1.17 million litres of water at 41 degrees Celsius every day, it has been a spa town since the Roman period, and is home to one of the best-preserved ancient sites in Europe, the Roman Baths. In the Georgian era, it became the fashionable place for the wealthy to visit – both for the health benefits and the social scene. Most of the city was built at this time – it must have seemed ultra-modern back then – so elegant Georgian buildings meet your eye everywhere you turn, including the Royal Crescent, the Circus and the Pump Room. 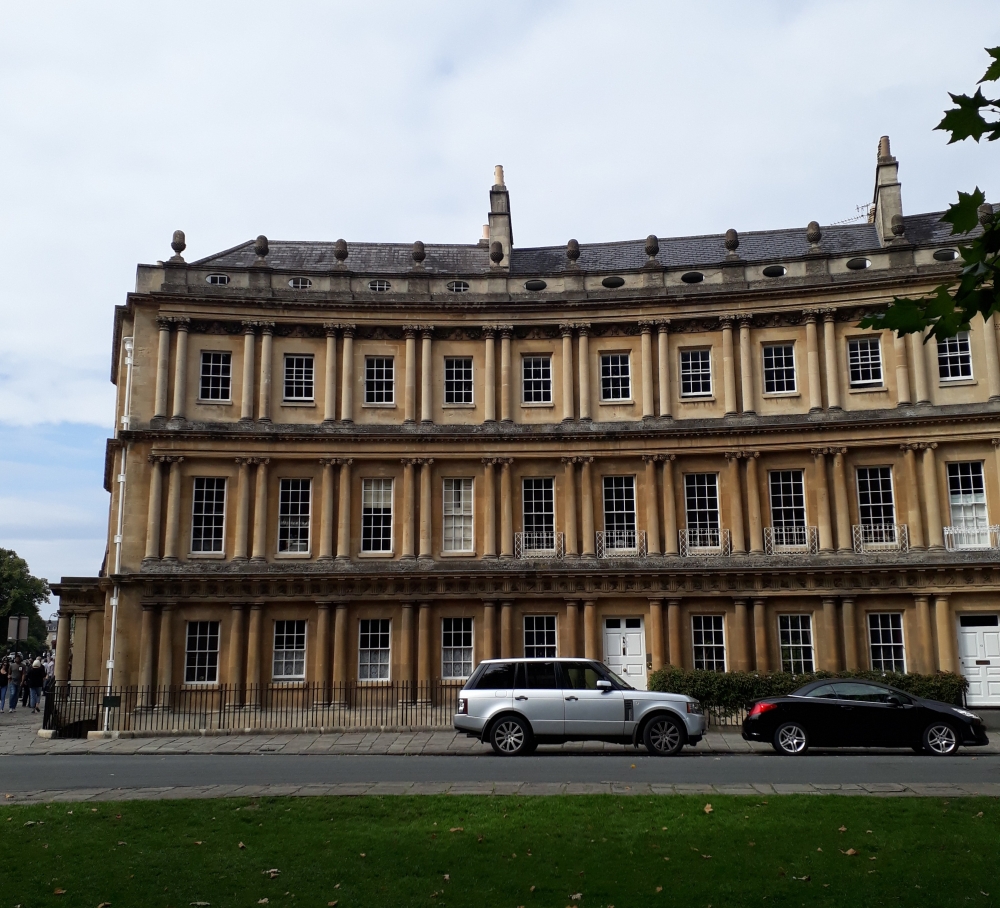 Jane Austen spent much time here, visiting, usually for a period of a few months, several times through her life. You can find out about her life at the Jane Austen Centre. It’s worth a visit if you’re an Austen fan, but it is fairly small and a lot of the information won’t be particularly new if you’ve looked into her life at all before. However, it’s great to immerse yourself, especially with the museum’s focus on her time in Bath. It brought the city to life for me.

I read Northanger Abbey while I was there. Catherine Morland’s wide-eyed enthusiasm mirrored how I felt exploring Bath, and the descriptions of Bath and all its regency attractions added another dimension to my visit.

Every morning now brought its regular duties; – shops were to be visited; some new part of town to be looked at; and the Pump-room to be attended, where they paraded up and down for an hour, looking at everybody and speaking to no one.

But I also sensed the claustrophobia of the social scene. The characters cycle round a very small number of venues and activities, and before long they are wanting to escape, whether on a country walk, a carriage ride across to Bristol, moving on to Northanger Abbey, or breaking off an engagement…

‘Have you yet honoured the Upper Rooms?’

‘Have you been to the theatre?’

‘And are you altogether pleased with Bath?’

‘Now I must give one smirk, and then we may be rational again.’ 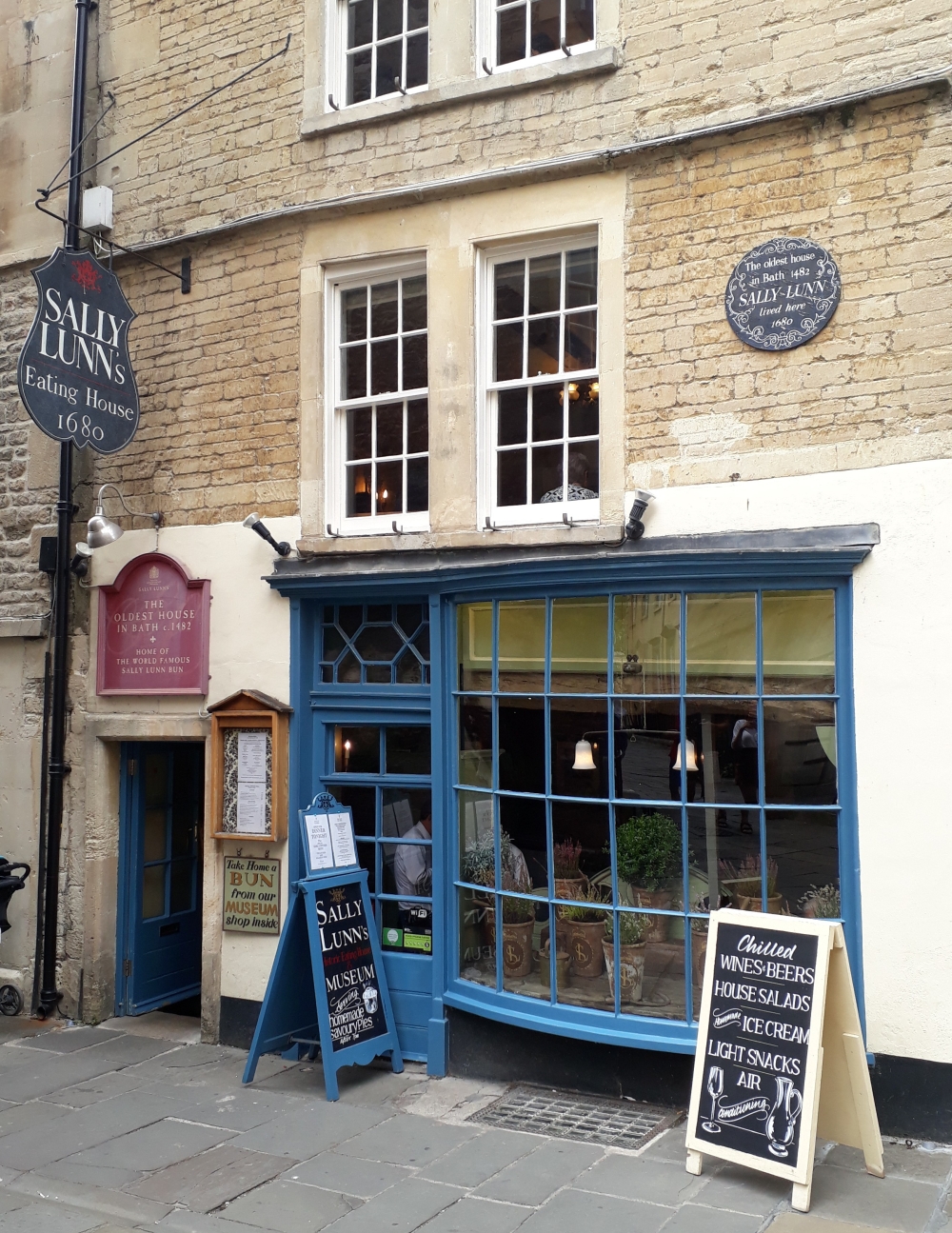 He was nowhere to be met with; every search for him was equally unsuccessful, in morning lounges or evening assemblies; neither at the Upper nor Lower Rooms, at dressed or undressed balls, was he perceivable; nor among the walkers, the horsemen, or the curricle-drivers of the morning. His name was not in the Pump-room book, and curiosity could do no more. He must be gone from Bath.

Nowadays, the Pump-room is a luxury restaurant, serving breakfast, lunch and afternoon tea. You can glimpse the large elegant room through its huge windows – smartly dressed waitstaff winding between the tables, and the ‘Pump Room Trio’ playing music for the customers’ enjoyment. It overlooks a section of the Roman Baths, and you can try the warm mineral-rich spa water for yourself. Though it all looked very nice, Bath is home to a plethora of exciting independent cafes at a much less alarming price point, and we had fun trying out a few of these – more on this later!

Every creature in Bath, except himself, was to be seen in the Pump-room at different periods of the fashionable hours; crowds of people were every moment passing in and out, up the steps and down; people whom nobody cared about, and nobody wanted to see; and he only was absent.

I would definitely recommend a visit to the Roman Baths; it’s worth the price. It’s a large site with loads of information, so you could spend hours there, and I found it fascinating learning about this Roman equivalent of a spa – not to mention a bit jealous that I couldn’t visit it myself!

Our airbnb host warned against the pricey recreated Georgian house, No. 1 Royal Crescent – but I enjoyed my visit, especially standing in the elegant Withdrawing Room and looking out of the window at the Crescent, imaging myself a Regency lady spying on my neighbours… Having said that, it is crowded and contains nothing you wouldn’t find at a National Trust property dating from the same era, so might be one to miss if you’re on a budget. 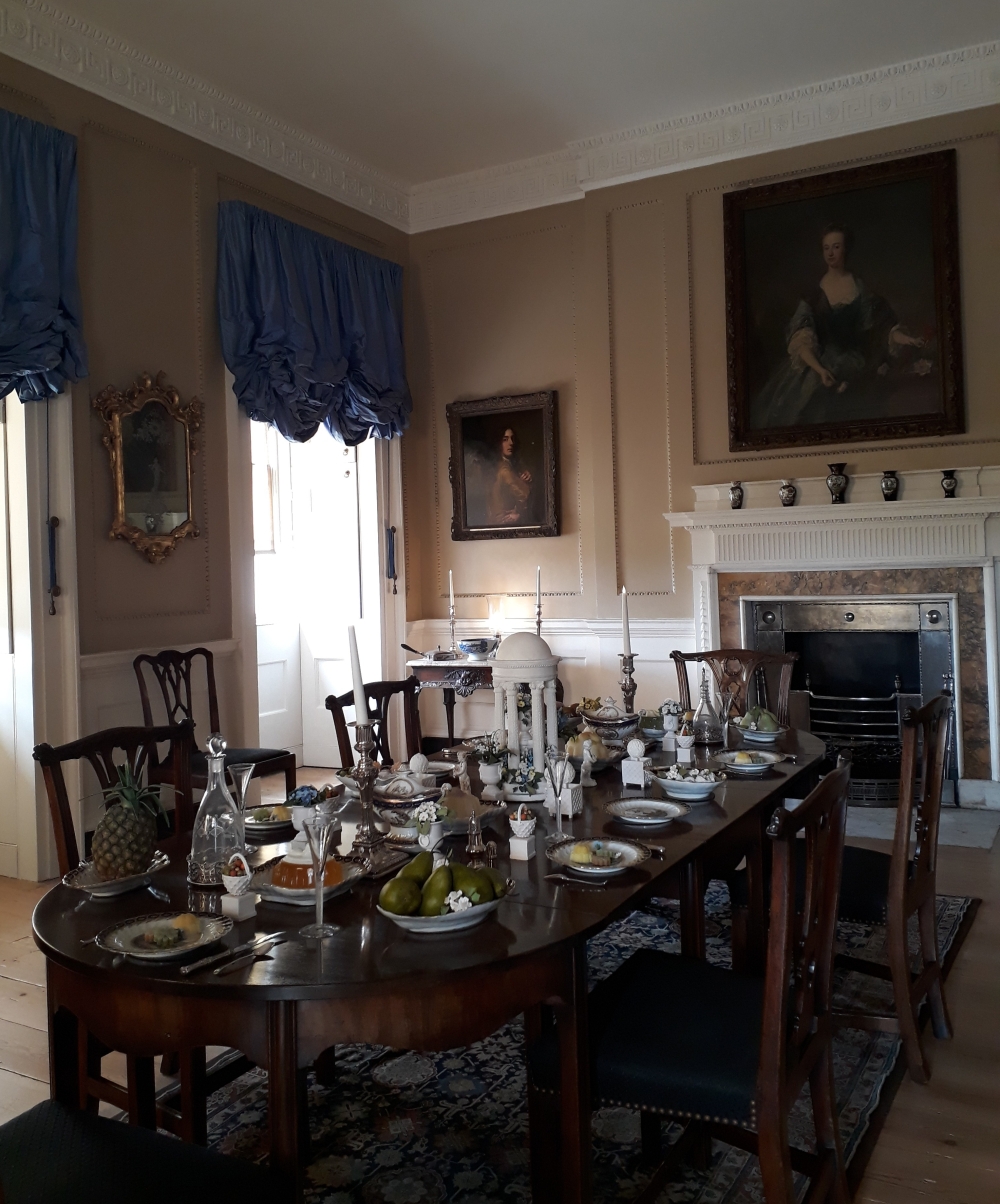 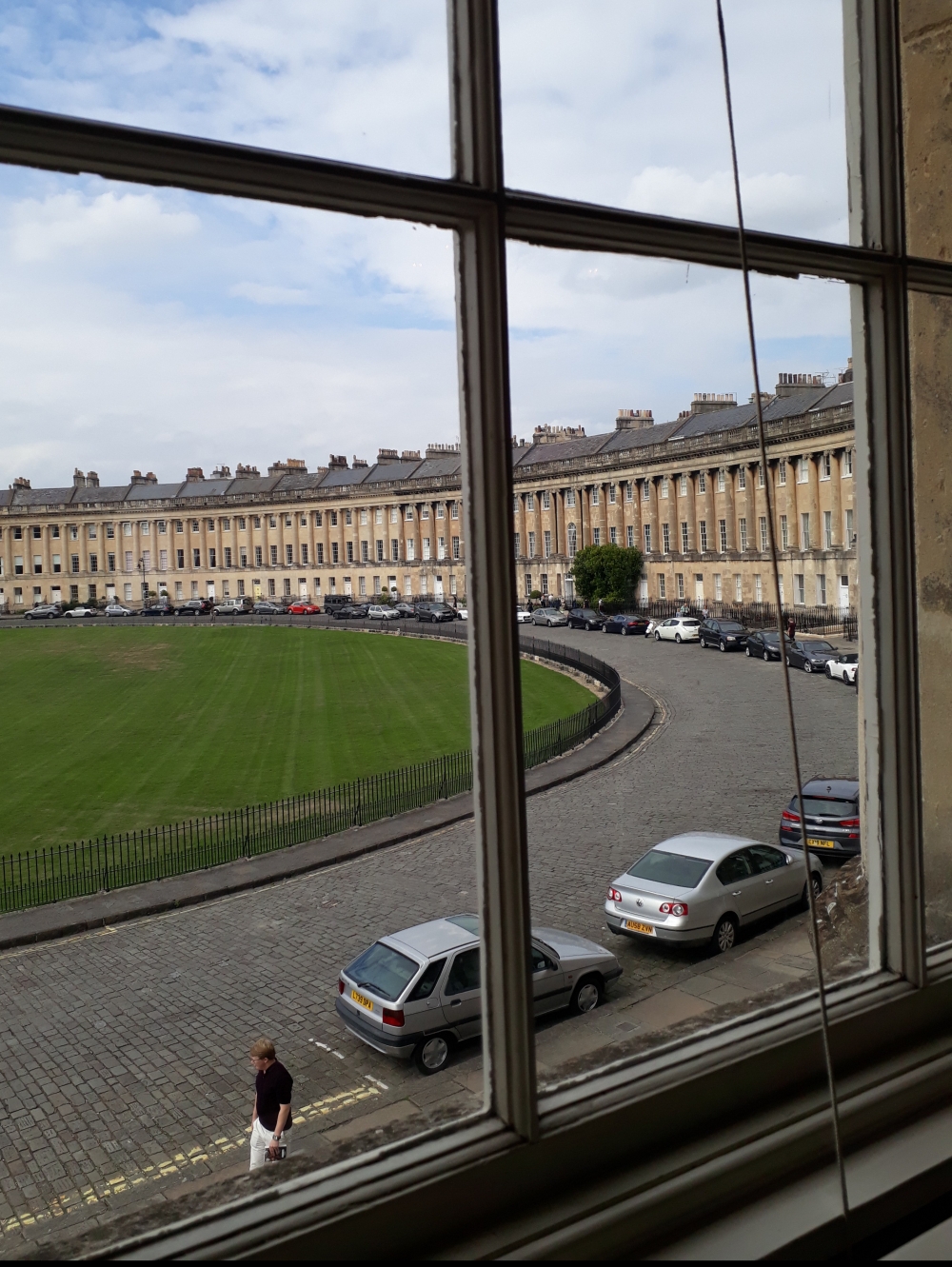 Walking around the Crescent and the park below it is probably the most unmissable activity in Bath.

A fine Sunday in Bath empties every house of its inhabitants, and all the world appears on such an occasion to walk about and tell their acquaintance what a charming day it is… they hastened away to the Crescent, to breathe the fresh air of better company.

Something of a hidden gem in Bath is Prior Park, a small National Trust place covering a stretch of parkland and woodland stretching down the hill between the village of Combe Down (where we stayed) and the outskirts of the city down in the valley. It has incredible views from the top of the hill out over all of Bath, and it’s worth a visit if you’re staying in the area or fancy a breath of fresh air on a longer visit. However, if you don’t have a National Trust membership, bear in mind that it will only occupy you for an hour or two. 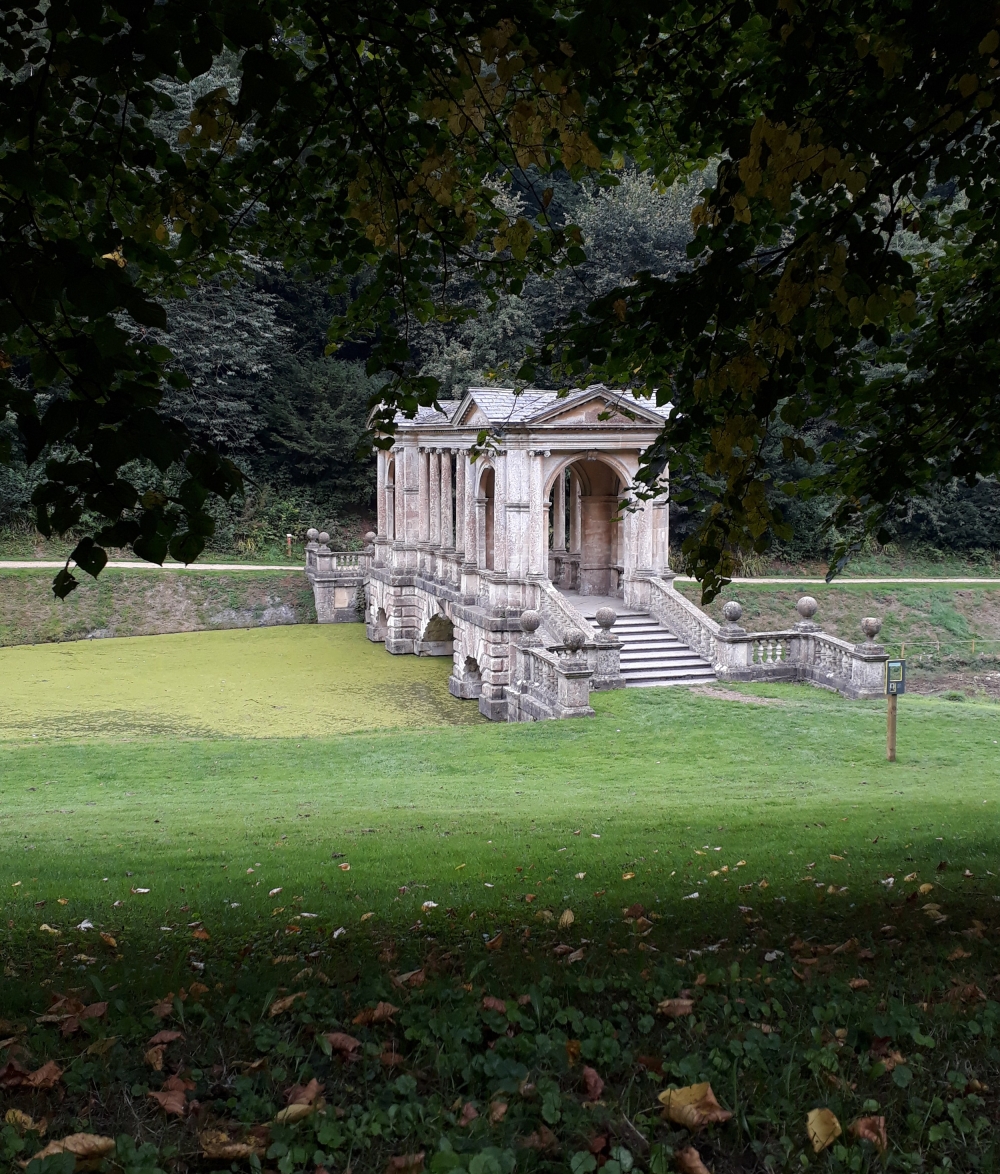 And now… the cafés… I’ve already written a blog post about my favourite, Wild Café, but right in the central square, looking out onto the Pump Room, the Roman Baths and the cathedral, is Mokoko. This independent coffee shop has two branches in Bath and one in Bristol, but the central branch has a location that’s hard to beat, about 20 delicious cakes (including several vegan options) and a great range of teas and coffees. I believe they also do salad boxes for a quick healthy lunch. The nutty caramel cake was incredible. 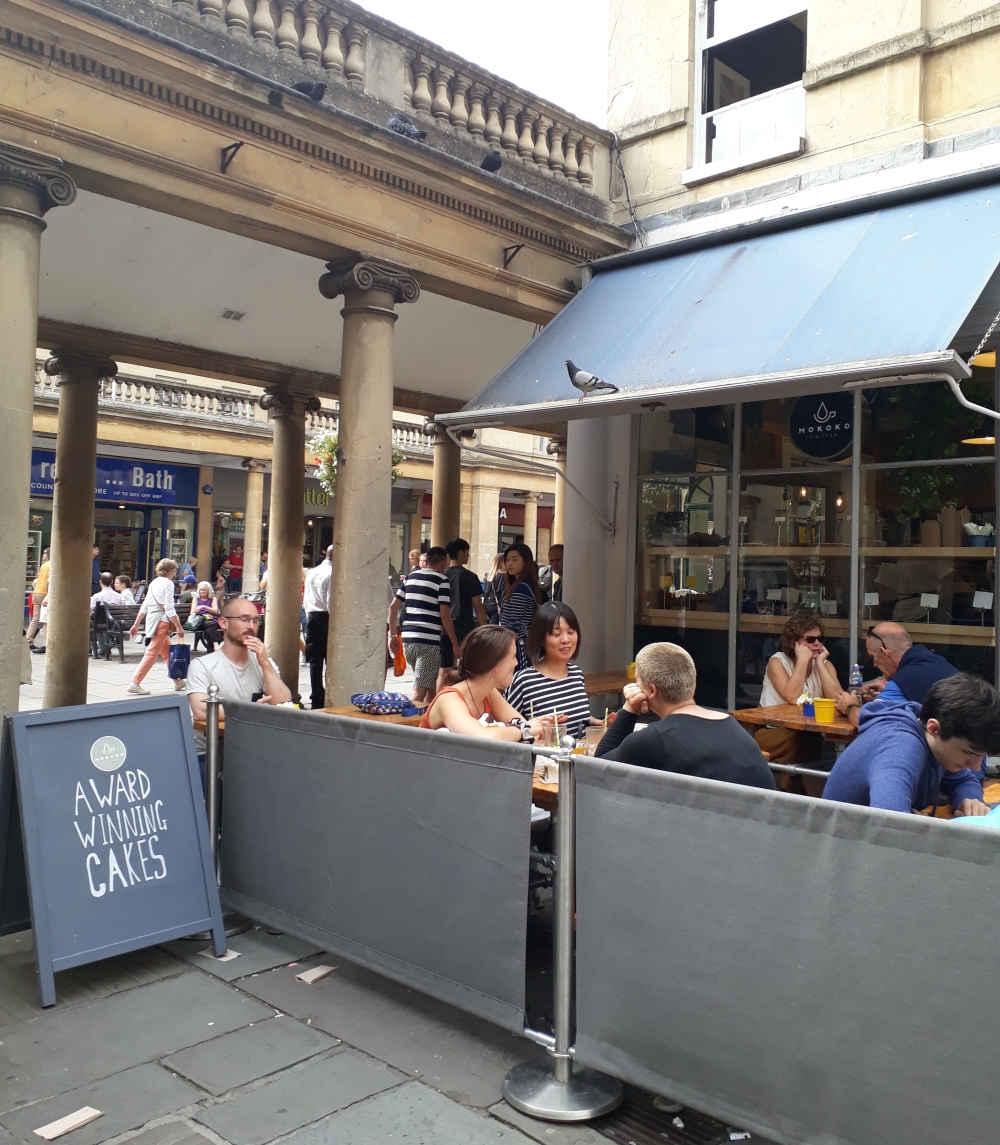 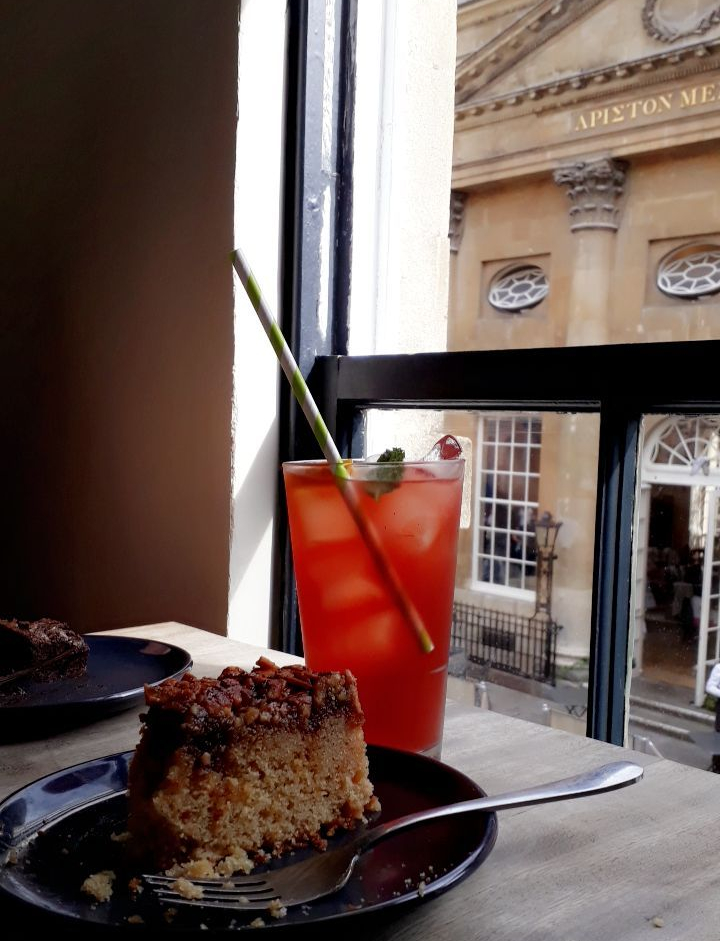 We also had lunch at The Courtyard Cafe. Though only a street away from the central square, its location down a flight of steps in a cosy leafy courtyard makes you feel like you could linger all day. I loved my chicken, bacon and avocado sandwich, and my mum chose the daily special, vegetarian lasagne, which she found delicious and filling! I was also impressed by their list of loose leaf teas. 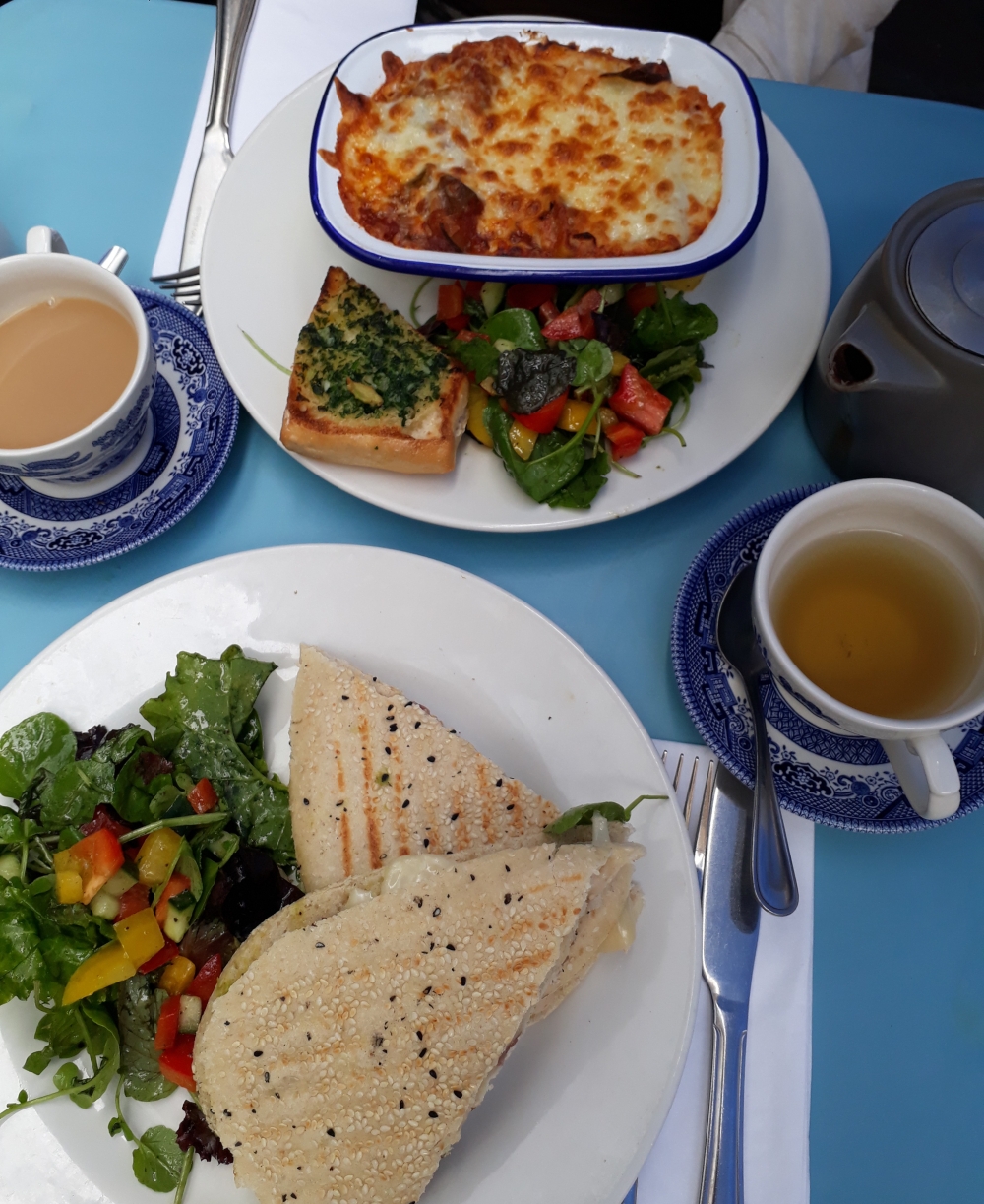 Check out the airbnb we stayed in, a beautiful historic cottage in the peaceful village of Combe Down, here! 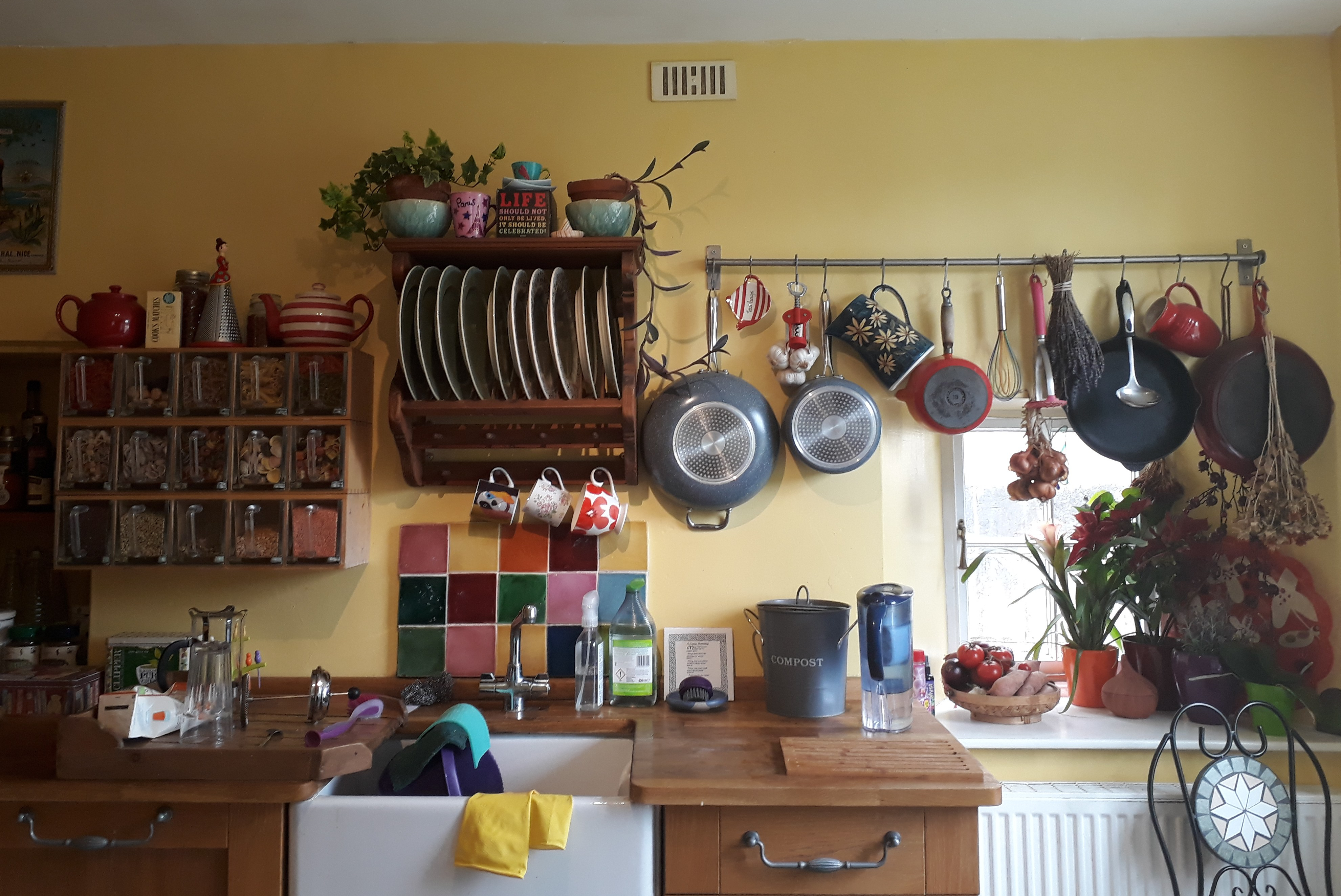